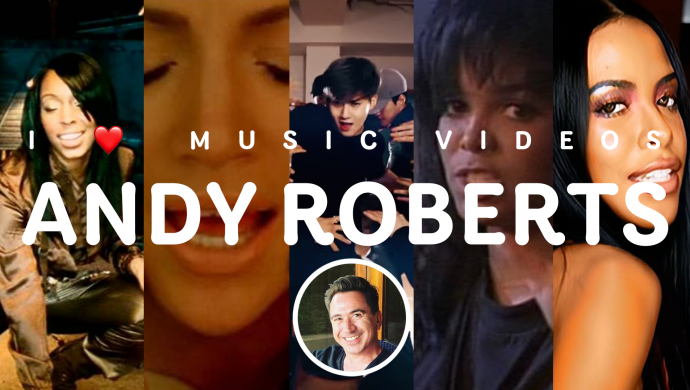 We’re talking about the all-singing, all-dancing, slick and sexy, super-ambitious and simply magnificent videos that have been the driving force of the music videos business for decades. So we’ve invited Andy to build his own playlist on Promonews, giving us an insight into his personal love of music videos, in our brand new playlist series.

This was a tough ask for a person with near encyclopaedic knowledge on the subject. He describes it as "the most difficult job ever", requiring hours of pondering, editing, and painfully leaving out some big names. But what remains includes a combination of classics and surprises – his favourite videos from several decades of genius music video creativity and artistry.

The artists? How about J-Lo, Aaliyah, Ciara, Madonna, Lil Kim, Mis-Teeq, Janet... Actually it's not just the greatest music video divas, but quite a few of them do make an appearance. And even more amazing choreography.

Back in the day, Andy (above) was a pop video director himself, and as a director's rep he has been involved in more top-notch pop vids like the Brit Award-winning Woman Like Me for Little Mix, in his current role as "music video midwife". And his wonderful playlist is framed like you've all been invited on a night out to a club with wall-to-wall video screens blasting out these astonishing classics.

Sounds like a plan, right? So down that marguerita - or whatever else you happen to be holding - and let's have a Music Video Disco Party! (And you can create that party by firing up the playlist on our YouTube channel - with a few additional gems...)

Take it away Andy!

The one to break the ice...

I'll host my party at G.A.Y. Bar on Old Compton Street because it plays trashy music videos on multiple screens over two floors so you can wall-dance against a J-Lo video if you want to. Which I do. It's a natural home for this video for 70s/80s disco singer Pamala Stanley, for obvious reasons - the wigs mainly. And, also like the video, it's messy and you're never quite sure what happened afterwards. (Side note: We need to talk about music video restoration)

One to start a conversation…

Before A$AP+Skepta there was Guru+Solaar - directed by Fab 5 Freddy. A dual-city double bill, if you will.

A few to get the party started…

What a song. What a video. The sequence where she gets him up to dance... mwah!

I would also play the official gym version later in the night. Or back to back. You can't lose in either scenario.

If Scorsese ever puts out a list of essential UK music videos then I assume this would have to be on it. Mis-Teeq look amazing. And the edit.  Everything.

There's a reason Jake Nava went on to make Crazy In Love (and Brandy's Who Is She 2 U, which I will also play because her sunglasses on that street corner are  [💥] ). This will get Nikki Porter from Final Cut on the floor, don't you worry.

The just gonna sneak this in here one...

In which J-Lo captures the feeling I get on a Virgin Train to Liverpool. There's a shot of a glass of water that looks sexy. A glass of water. And it predicts the Bolt camera. But not the future ex-husband/dancer. Beautiful.

Not much of a conversation. More of a monologue about why this is a Madge classic. The leotard, ABBA, lighting, the whole breakdown-buildup sequence, riding a boombox... and Supple Nam is in it! Find him and start a conversation. He's great. Or find me. In a corridor... slow-mo wall-dancing... no talking.

This one is better than the official video because it is magic. Who needs VFX? They are the special effects. What a song.

Gloria Estefan - Rhythm Is Gonna Get You (1987)
Director: unknown

I have a friend who believes Gloria Estefan is our own Nostrodamus because of this video. Firstly, there's a dancer in a threatening mask emerging from a crowd. Secondly, in the age of big data, algorithm is gonna get you (it already has). But did she foresee her own coked-up key-tar player stealing her video? Once this video draws you in... hard to look away.

The one to make you nostalgic for your youth...

You want your artist to look badass? How's this shot? Pow! And this shot! Pow! And she did her own back-flip. And gave us a nod to Footloose (the original). Iconic.

The one that got away...

Oh Fabrizio... how I loved thee. It was usually the drummer.

The one for the sexy, saucy moments...

The direction, the choreography, the hair which looks slept on and surrounded by crotches. One of the reasons Melbourne is my favourite Aussie city is because she's from there. Only been to Sydney once. Had a fag at the airport in the middle of the night on my way through. Not like that.

Side note: Kylie can never be wrong, but... she should have released Speakerphone as a single and made a big video for it. At the time I wanted to see her as a Heineken fembot walking/dancing home from a club through the deserted streets of Paris at dawn. But they weren't releasing it as a single and they certainly weren't going to give me £200k just because I was right (and still am).

I'm not a religious man but I do believe Giraldi should be canonised because he made miracles.

The one everyone can agree on at 4am...

It can be hard to balance performance with narrative without just cutting back and forth all the time but director Bob Giraldi made it look easy. 'Battlefield' is supposedly the first music video to feature dialogue which begs the obvious question: Would Madonna's Papa Don't Preach video exist without this? Would I?! I'm not a religious man but I do believe Giraldi should be canonised because he made miracles. Fair is fair.

The one that chills...

My dad reversed his car over my lovingly hand-painted board once and I never skated again. I never really started tbh. My dream in my 20s was to marry a professional skater who was sponsored by a major brand (update: didn't even get close). I still have this on a pristine VHS I found in a skate shop. I wish more music video directors attempted to put a new visual spin on skating (HINT: GET ON WITH IT).

Following Irene Cara is technically impossible. That's been settled. But from the moment Erica Gimpel danced on a table in the Fame TV show (i.e. almost immediately) she was Coco Hernandez to my young eyes. And my eyes were 20/20 then. The generation above me remembered the moon landing, I remember Take Me.

The one to quietly leave to...

Me and a friend played this video recently over a second bottle of pinot. Turned out the iconic Buffalo Boy had died the night before, and yet it wouldn't be announced for several more days. We weren't alone either. One of our mates did the same thing on the same night.

The only possible explanation is that we all picked up on him saying goodbye through the medium of music videos. Iconic to the end. Rest in pop, Nick Kamen.

While he has been quarantining, CHEAT colourist Jack McGinity (above, with his dog Evie) has kept himself very busy. For a start, the grading work is still coming in. But when he gets the …

Being unable to present live events during the lockdown period, music video show BUG has just launched two playlists that reflect the state of the world right now and its current obsessions: Staying …

In spite of everything that has happened this year, one thing continues to get bigger, better, more impressive - the devotion to music video makers to the medium of Film. 2020 has arguably seen …

Lee Fairweather, director's rep at COMPULSORY, has the hots for Diane Martel. That became clear when Promonews' writers David Knight and Rob Ulitski talked to Lee for the first episode of …