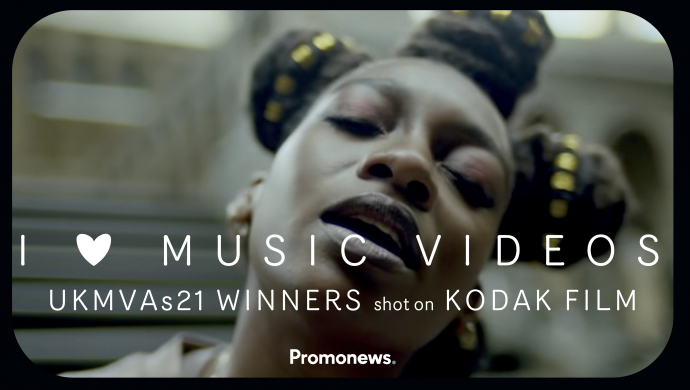 While lots of awards were handed out at the UK Music Video Awards 2021 last month, perhaps the biggest phenomenon of the year went largely unreported at the time - the number of winning videos that had been shot on film. In fact, eleven of the winning videos at the UKMVAs this year were shot on Kodak film.

Such is the popularity of film as a medium in the making of music videos right now, no less than 38 videos that were nominated at the UKMVAs this year were shot on Kodak film stock - usually 16mm - accounting for no less than 52 nominations.

“2021 proved an exciting year for Kodak Motion Picture and we were delighted to see so many winners and nominees chose to shoot on Kodak film at the UKMVAs," says Sam Clark, director of sales at Kodak Motion Picture Film UK. "Film capture continues to see significant growth, especially in 16mm format and the music and television segments and we look forward to continuing to support filmmakers from all genres in 2022.”

So in the latest in our playlist series I ❤️ Music Videos, here are those winning videos from the UKMVAs 2021...

Ilya Naishuller (Promonews 30th April): “I think sooner or later, everyone that plays in a band faces a moment of uncertainty towards the other members. If a band is a living organism, what happens when its legs start walking in different directions?”

From Promonews, 1st Dec 2020: Set against the backdrop of a rural Spanish salt mine in the '50s, the video tells the story of Jesús, a salt miner whose young daughter dies in a tragic accident...​

Filmed in black and white on 16mm film, the cinematography has a beautiful contrast of raw, authentic textures and vintage techniques, coming together to create something remarkably unique.

From Promonews, 14th June: Noah Lee creates a palpably resonant dreamworld, full of quirky visual tricks streaming from the subconscious of his subject, the intriguing Celeste, in the video for Tonight Tonight...

[It's] an authentic imagining of a subconscious mind. It's also framed in a film aesthetic, and with use of lenses that creates an aura that manages to be glamourous and romantic as well as surreal.

Homeboy Sandman & Pavel Buryak (Promonews, 22nd April): "We see the world where people who surround us every day, who... go unnoticed. Each of them believes in something and everyone has a hope. A monument is a result, a tribute to something from the past, unshakable, but with a message to the future."

Best Alternative Video, UK : James Blake – Say What You Will

From Promonews, 6th August: "Who knew that James Blake could act comedy? Bear Damon, presumably, and maybe Blake suspected it himself. There are various elements that make this an outstanding video - not least the (self-mocking) presence of Finneas."

From Promonews, 23rd June: Joy celebrates her Bengali roots and London upbringing, with the elements of East, West, tradition and modernity all drawn together with considerable flair and wit by Taz and team, in a series of eye-popping visuals.

Salomon Ligthelm (Promonews, 27th April): "It's hard to know who you are, or to accept who you are when you are made to feel like an outcast, an enemy. The film is about finding people moving from a state of chaos and societal disconnection into a space of community, connection and freedom - embracing a true understanding of who they are.”

From Promonews, 8th June: "Shot in a gritty, documentary-esque style by DoP Raphaël Vandenbussche - with terrific VFX/Flame work by Vincent Heine - it's a brilliant visual that turns a couple of tropes on their heads, and ends with a climactic display of karma."

Greg Barth (Promonews, 17th March): "Making this definitely was an ambitious undertaking, with a large group of dancers and a tight choreography that had to be created in a matter of days...

"The Gen-Z and Baby Boomers are seen through the eyes of a millennial (me), hence the anachronistic world the film is set in. The Warriors, Michael Jackson's Bad and Escape From New York were key to drench this world in the proper late 70' early 80's vibe..."

Femke Huurdeman (Promonews, 28th May): "This is the journey of finding your core, coming to terms with who you are. Radiating this from oneself is at the heart of the concept of the video."

From The New York Times: "For musician Topaz Jones, the Black ABCs served as an inspiration to explore his own coming of age in Montclair, N.J. In the Sundance Film Festival winner "Don't Go Tellin' Your Momma," Jones and rubberband. take viewers on a visual and musical journey through Jones's education on his own Black identity. Jones’s personal update to each letter of the alphabet continues the tradition of documenting Black life as valuable."

• All the UKMVAs winners here

Douglas Bernardt on his epic video for Nego Bala's Sonho - "We wanted to deliver a sense of hope for the future."

At the UK Music Video Awards 2013 last Monday (October 28th), music video creativity of the past year was celebrated as directors, producers, commissioners, and the craftspeople were honoured …

At the UK Music Video Awards 2014 last Monday (November 10th), music video creativity of the past year was celebrated as directors, producers, commissioners, and the craftspeople were honoured …

Lee Fairweather, director's rep at COMPULSORY, has the hots for Diane Martel. That became clear when Promonews' writers David Knight and Rob Ulitski talked to Lee for the first episode of …