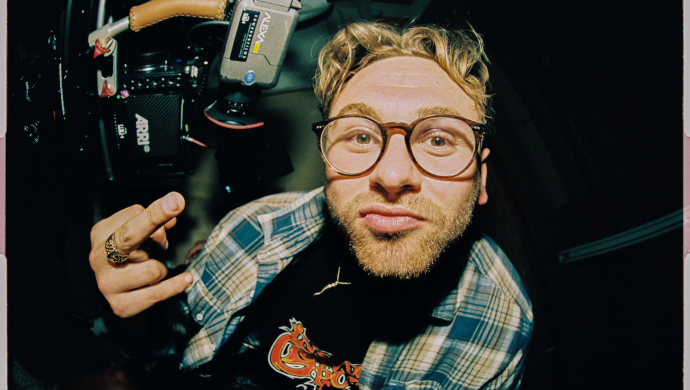 At 24, Thomas Davis already has a few years experience as a music video director. He co-directed his first video at 19, and since then has been active in both directing videos and live performances, building partnerships with a number of artists in the new wave of UK rock and indie-pop - including Beabadoobee, Alfie Templeman and NOISY.

Thomas hails from Rayleigh, near Southend in Essex. An (un)wasted youth of making skate videos with his mates was followed by studying Film Practice at London South Bank University. He was, unitl recently, a resident of Stoke Newington in East London, but since joining Beabadoobee on tour until the end of the year, his address has become: "a tourbus, somewhere in the US..."

What jobs were you doing before you reached your current position?
I used to work in my local skateshop when I had just left school. But once I needed to earn some proper cash, I used to work night shifts cleaning ventilation systems. Crawling through tiny duct work scraping grease to make the bread. Makes me grateful to appreciate what I'm doing nowadays.

I love telling stories in my work.

Which music video most excited and inspired you when you were growing up?
The first video I remember falling in love with was this tune from the video game EA Skate 1 - Chase Money by Trouble Andrew. He is this dope artist also known as GUCCI GHOST. I remember searching for the song on YouTube as a kid and came across the music video. It was just so cool. Trouble Andrew's performance is sick, and it was sick to see skateboarding in there. That's probs why I loved it so much. hahaha

Name a project (or 2) you’ve done that was significant as a learning experience, and why?
The first music video I directed back in 2016: RATBOY'S GET OVER IT. I had just turned 19, and built a relationship with RATBOY and we were on tour when he asked if I wanted to direct the music video for the tune. We wrote a crazy idea and the label actually let us go ahead and make it.

We shot it out in the desert near Almeria in Spain. I had turned up to the hotel and I met the first AD, and I was like, 'who is this guy making a schedule?' and all that. It was all quite mad to begin with - it even got nominated for Best Music Video at the NME awards in 2017. It was kinda that point where I knew I was pretty good at this.

We wrote a crazy idea and the label actually let us go ahead and make it.

Don't get me wrong, they were all ridiculously ambitious (sorry production), but it's all worth it when you see the work at the end. So I guess it was quite motivating, making me push myself further.

I really loved working with Frank Carter and the Rattlesnakes on Go Get A Tattoo. We made what I would say a pretty epic video. To be honest, I don’t really know how this idea came about. I just listened to the song a few times, and had a call with the band's management and then it just kinda came out of nowhere. There was a lot of in camera SFX and quite a lot of post work done too.

Another sick project we made was for Alfie Templeman’s Everybody's Gotta Love Somebody that we shot in January. Another ambitious idea that I originally wanted to shoot overseas, but due to the pandemic, we just couldn’t travel. We were extremely lucky shooting on the only day of sunshine in a lockdown January at the start of this year, in a quarry in Ipswich.

The narrative follows the artist Alfie Templeman befriending a puppet called Brain as they go on conquest to re-connect Brian with his long lost love (another fluffy puppet named Suzie), set in somewhat of an intergalactic desert.

What are your favourite other jobs (music videos or otherwise) in the past year or so?
Another one of my favourite jobs was the bigboy live session we did for Beabadoobee's debut album Fake It Flowers.

Bea was supposed to tour her debut record, but due to the pandemic, her tour and like everything else, was cancelled. So it was a blessing to be given to the opportunity to document her debut in such a large scale and in what I would say in such an iconic way. Like all my jobs, it was ambitious, but having such a solid team around me always lets us make the best shit possible!!

What’s coming next? And what would you like to be doing in future?
What's coming next? I'm not sure to be honest. I just want to keep making videos that I enjoy and get a real kick creatively from. Me and my rep are looking to step me in to commercials, I've pitched on a couple. But waiting for that first big bang in that field you know.

But in the far future, I guess I would like to make a feature film. I love telling stories in my work, and to have the thought of someone sit there for an hour and a half watching something that I've made, and hopefully leave the cinema feeling something new... yeah that's what I'd love to do.

I'm still working it all out.

Do you have any advice for someone entering your field?
The best bit of advice I can give to someone entering my field is just get a camera and shoot. Post your work online and start watching other people's work. Become inspired and keep making shit and don't stop being productive.

Tell us something that we don’t know about you...
There's a lot I don't know about myself, so I guess what you don't know is that I'm still working it all out.

When you’re not working, what do you like to spend time doing?
I'm usually just chilling or hanging out. I'll be out skating if the weather is nice, or down the pub enjoying a cold one.

What are your favourite music videos by other people in the past year?
I absolutely loved a few videos by The Rest, Slowthai's guys. The video for NHS - I feel it was a great documentation of the current time, and it just hit me hard. It was so stripped back, but such a great watch. I also loved the video for Vexed, the idea of the human meat coming from the people that Slowthai and Skepta murder, then putting them inside the the burgers that send people crazy. That shit's too good. Lol.

The Slowthai video for NHS... just hit me hard.

Where did you go on your last holiday?
My last holiday, was off of the back of a trip shooting in LA. We did a Nike content job, then stayed out for the vibes for a week after the shoot. So I guess it was a holiday?

What have you enjoyed most recently on the TV or at the cinema?
I absolutely loved Once Upon A Time In Hollywood, when I watched it for the first time the other week. I put off from watching it as I had a handful of friends say "nah, its not that good... blah blah". But eventually I watched it and I was so annoyed. I should have watched it way sooner. It's use of visual storytelling is so so great. To be honest the whole film is incredible.

Favourite music and artists in the past year or so? And of all time?
Past year: Easy Life, Slowthai, Working Mens Club, NOISY; All time: Beastie Boys, Fugazi ... there's just too many.

It's important to tell your friends you love them.

Favourite food & restaurant(s)?
I love a tapas. Theres a banging Cuban spot in Dalston, Escudo de Cuba. The cocktails are pretty naughty too. Can't beat a good late night McDonalds. Yeah it's bad for you, but it's the best.

What’s your favourite political or charitable cause, and why?
A charitable cause that I have a personal connection with is The Ben Raemers Foundation. Ben was a professional skateboarder from Essex who had taken his life in 2019. The charity was set up to maintain Ben's legacy and raise awareness around mental health within the skateboarding scene.

Creating a platform that enables people to talk about mental health, breaking down their fears, removing the misgivings and preconceptions around mental health stigma. It's important to TELL YOUR FRIENDS YOU LOVE THEM.

Best recent purchase (send photo, if poss)?
Slush Puppy Machine. Got it around the time of when the Euros was on. Frozen slushys on tap. Too good.

Work & Life - balance/ imbalance out of five (1 for imbalance; 5 for balance)?
I'd say my work Life Balance is deffo about a 3 to 3.5. It's hard for me to have any balance when I'm busy. But I try and keep chirpy and chill. But when there is time off, I'm still learning how to take it without wanting to work and make more videos.

Lope Serrano of CANADA on Dua Lipa's 'Love Again' - "I tried find a way to escape from clichés."

Over the past few years Jazmin Garcia's work in short documentary and music video has explored themes of immigration and cultural assimilation, using family histories and her own experience as …

A woman goes on a journey of escape and self-discovery, in Sebastian Whyte's powerful visual for …