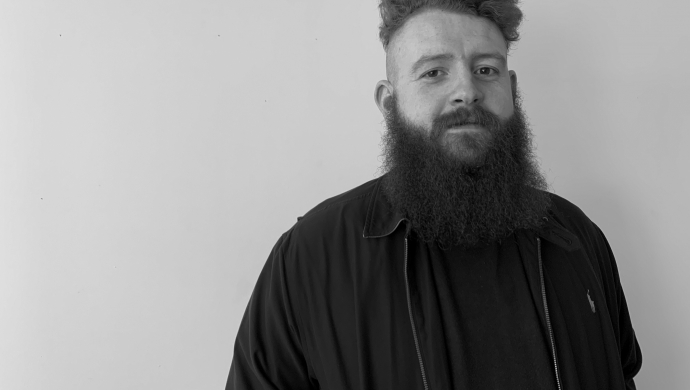 Connor Coolbear joined the colour team at Electric Theatre Collective in 2018 and has been making big strides ever since. His grading of music videos - his credits include videos for Slowthai, Shame, and the MVA-winning live video for The Weeknd - short films and commercial and branded work led to his appointment to colourist with his own suite last year, becoming the third full member of the ETC colour team with his colleagues Luke Morrison and Jason Wallis.

Connor, 28, comes from Southampton, and studied Filmmaking at Bristol UWE. Now he lives in South London with his wife Jess. We spoke to him about his progress thus far, and found out how his former job in hospitality helped in his chosen career - and how he's responded to not having any bars and pubs open during Lockdown 3.0...

What was your first job, or first significant break in the industry?
When I was at Bristol UWE, they had just built a colour suite that no-one knew how to use or teach. So I locked myself in there for the third year, hitting buttons and making mistakes on everyone’s projects.

After uni, I was managing a pub back home. I decided to up sticks with a few savings to the Big Smoke to force a career change into grading. I landed on my feet with a great opportunity running at Rushes, and even more jammily the head runner left a couple of weeks later. Due to my previous job I somehow nabbed a quick promotion.

Once my foot was in the door, it was tunnel vision from then on.

We were organising BBQs for a couple of hundred of people every Friday on our roof terrace, so I felt right at home serving food and making sure the beer was cold. Once my foot was in the door, it was tunnel vision from then on.

Name one music video that inspired you that get involved in making music videos?
There was a large part of growing up where hours were spent just flipping between the music channels watching videos or waiting for one; old or new. Frontier Psychiatrist by The Avalanches always sticks out; it was a big tune between me and my friends. The video is a madness and has a turtle with an old man’s head doing the vocals, and that is right up my alley.

Name one project you’ve done that was significant as a learning experience – and why?
The first project I graded on a Baselight! It took me a millenia at first to find the buttons and switch to grading layer-based.

What are your favourite music video-related jobs of the past year or so (2 or 3 different ones, ideally), and why?
A recent highlight was grading The Weeknd’s In Your Eyes/Save Your Tears performance for the American Music Awards. It was a beautifully simple and well executed idea from Alex Lill exploding with colour. Lots of fireworks.

Another that comes to mind is a trio of videos for Passenger by my good friend Raja Virdi, lit brilliantly by Pieter Snyman. They play as a singular narrative piece, and we utilised the grade differently each time to help exemplify the transition in time despite being in the same location for each video.

What are your favourite other jobs of the past year or so?
A Cold Wall AW21 by Will Dohrn. A sprawling and thumping fashion film where we used different grading approaches to each narrative component, combining colour and black and white purposefully. Also got to throw in some wacky shaders on one setup for some anti-grading.

Midnight Snack by Luke Roulstone. The brief was to grade it as if the print had been found at the back of a sofa, and it was being shown on a dusty projector. Proper midnight movie with overtones of one of my favourite films Videodrome, with some insect cereal to boot.

Crossed Paths by Duncan Loudon. Sonic collision with simple and salient visuals, with two distinct palettes to differentiate the artists using Burberry's clothing as a throughline in terms of colour. Tricky but rewarding.

What are you currently working on?
A nice mix of music videos, commercials, short films and online content. It’s great to be able to flex different approaches for grading.

What kind of work would you like to be doing in future?
Anything that is made with love and taste! I do want to tick off a feature shot on 35mm one day, but I’d settle for 65mm!

It helps having a dialogue with directors when you are a custodian of their pixels.

What advice would you give someone entering your field?
Take in as much visual media as humanly possible. Be it cinema, photography, sunsets, et cetera. And really know your onions when it comes to these processes. It helps having a dialogue with directors when you are a custodian of their pixels.

Be helpful and kind, listen and work hard. Don’t be overzealous but do knock on the different doors required. Some chats are better to approach at the pub. Befriend the engineers.

Make sure you really want to do this. Grading is somewhat bottlenecked and you’ll be pulling long shifts wracking your brain and problem solving when assisting; to then immediately go into an evening grade and create some colour magic!

I’m really craving a few pints of Guinness and shooting the breeze with some mates again.

Tell us something that we don’t know about you...
I wrote and directed a film, Dennis, that got selected into Raindance Film Festival, in 2015.

When you’re not working, what do you like to spend time doing?
Playing guitar has become pretty meditative for me these days. Day to day - rambles, eating good food, and watching endless films with my wife. At the moment I’m really craving a few pints of Guinness and shooting the breeze with some mates again.

Where did you go on your last holiday (or vacation)? And where would you love to visit?
We went to the Highlands of Scotland last autumn; I’m pretty adamant it may be the most beautiful place on Earth and no-one seems to know. Also whisky.

We were going to celebrate our honeymoon in Cambodia and Vietnam, but that got canned by the pandemic; so I think those are definitely the next places to hit once possible!

I’m pretty adamant the Scottish Highlands may be the most beautiful place on Earth.

What are your favourite currently-running TV shows?
I’m always late to the party as it feels like I'm constantly chasing my watchlist. So I’m not sure what ‘current’ is as I always come into the series late. At the moment I’ve been watching every episode of The Simpsons, from when it was actually good in the 90s.

What are your favourite music videos by other people in the past year?
A few come to mind. Femi Ladi’s thumping vid for Pa Salieu’s My Family, In/Out's fantastic video for Stranger Than Fiction by Moses Boyd with sick in-camera trickery from Spike Morris. And on the flip of that, with some striking VFX, Arnaud Bresson’s video for Afterlife by Flatbush Zombies.

Favourite music artist(s), and favourite gig(s) in the past year?
No gigs! But I’ve been enjoying this mini post-punk revival (if you can call it that) with bands like IDLES, Shame and Protomartyr at the helm. Lots of funky, nu-jazz stuff is also getting rinsed in the suite, like The Heliocentrics and Yussef Dayes.

Favourite food and/or favourite restaurant(s)?
The last place I went to before lockdown was Ducksoup on Dean Street in Soho. There was a hake dish in there that nearly changed my life.

And/or your favourite/most comforting food whilst stuck in lockdown?
Roasts! They’ve become an elaborate event.

What’s your favourite political or charitable cause, and why?
The Felix Project. It rescues surplus food for communities and schools in London that need it. A seemingly obvious idea that has become vital.

Best recent purchase (send photo, if poss)?
My commuting bike got nicked recently and with a minor addiction to the Uber Jump e-bikes, I’ve bought a Vanmoof e-bike (with insurance) and already know it’s going to be the best thing I’ve bought in a while. It’s basically got a throttle.

What’s the favourite/most rewarding part of your routine when you have to be in lockdown?
Pretty pedestrian, but having time to knock off boring house-chores as they come is freeing.

Anything you’ve achieved in lockdown that you wouldn’t have done otherwise?
Got mildly obsessed with collecting booze - and can now make 50-something cocktails. Homemade syrups, clear ice, the lot.

• Connor Coolbear is a colourist at Electric Theatre Collective in London. Check out his reel here. Contact Colour EP Oliver Whitworth at oliver@electrictheatre.tv for more details.

Behind the Sam Dew trilogy by Young Replicant: "Understanding is secondary to feeling something."

Vanessa Mc Donnell has been running the music video division at Lowkey Films for the past six months, and from the moment she arrived it's been non-stop. But as the year draws to a close, …

A young man battles with small town life, in Matthew Thorne's second video for The Howl and The Hum.