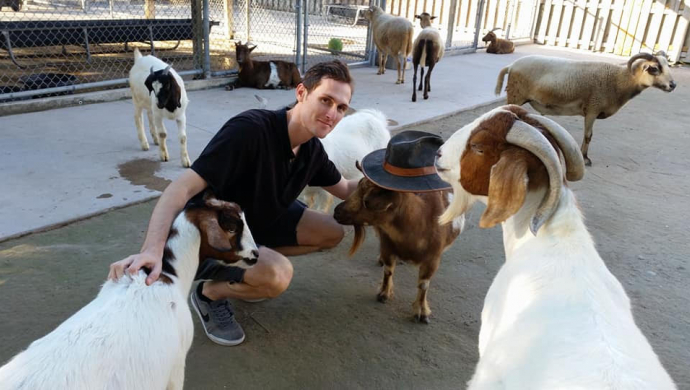 Challenging as it was, 2020 was a big year for Colin Read. When he was not making acclaimed videos for Glass Animals - including the definitive 'first lockdown' video for Dreamland - and Doves, the Pulse Films director was helping to mobilize the American skating community to vote, with his Skater Vote PSA.

Colin - above, with some trilby-stealing friends - also won his first UKMVA award in October for Mild Minds' Walls, the ingeniously constructed video that caused a stir at the start of the year. Prior to that, his early music video output came in tandem with the work as a skate filmmaker, where he made his name with groundbreaking films, including the award-winning Spirit Quest.

Colin grew up in Florida - describing himself as a 'military brat', due to his family involvement in the armed services - then he went on to study fiction writing at the University of Florida, before moving on to New York University. Now 32, he lives in Greenpoint, Brooklyn, with his wife Fernanda.

And we caught up with Colin just as his new Weezer video just dropped - a masterclass of in-camera trickery - to get his take on the past year, and what he gets up to when he's not working. And recently that's involved a lot of pet-sitting...

How long have you held your current position? What were you doing before this?
I suppose I’ve been a director since 2017, when I directed my first music video. Before that I was a skate filmer, an agency editor, a furniture mover, a magazine interviewer, an adjunct professor, a fry cook…

What was your first job, or first significant break in the industry?
In 2017, I directed Man Of War for Radiohead, which was not only my first significant job, but the first official 'directing' experience of my life, after a decade of mostly making skate videos. It was terrifying, but it turned out that there was a lot of spillover of skills, from making conceptual skateboard videos to directing anything else.

The first official 'directing' experience of my life, after a decade of skate videos... was terrifying.

Name one music video that inspired you that get involved in making music videos?
Most of the videos that inspired me used extremely simple concepts that feel fresh and fully explored. Like Gondry’s The Hardest Button to Button for the White Stripes.

Name one project you’ve done that was significant as a learning experience – and why?
Every single one of them. I stepped into this world knowing nothing, and have had to learn everything along the way. Most of the learning came from being very open about what I didn’t know, and taking every new experience as a lesson.

It took a long time to feel comfortable in my abilities and knowledge. And after jumping into the broader filmmaking world as a director, I immediately stepped back and helped out on other friends’ sets, learning the technical side of things.

It took a long time to feel comfortable in my abilities and knowledge.

The Broken Eyes video for Doves that I did last year was my first time shooting on film since some little personal projects in 2008 or so; I loved learning about the workflow, and the restrictions - and thus creativity - it brings. Sometimes, less shooting time is more.

What are your favourite music video-related jobs of the past year or so, and why?
That Doves video, because it let me shoot with a great friend, Logan Triplett. He and I had been supposed to shoot my first feature last spring, but Covid had its own plans for our production schedule…

Weezer's All My Favorite Songs is another favourite, because it was just incredibly fun to make. I loved the instant gratification of the practical effects and forced perspective gags. And I still can’t believe that the guys in Weezer let me portray them as phone-obsessed zombies.

I still can’t believe that Weezer let me portray them as phone-obsessed zombies.

The video for Mild Minds' Walls ft. Boats was close to me for a different reason. It let me tell a story about the refugee crisis and immigration issues that are important things in my own family.

And then there was the Glass Animals video for Dreamland. It was also a lot of fun - probably because Dave Bayley himself did most of the heavy lifting! For that one, we had to write an instructions manual for Dave to be able to shoot the video himself, handling high-end gear with absolutely no knowledge of production. Luckily, he was a fast learner.

Dreamland was a lot of fun - probably because Dave Bayley did most of the heavy lifting!

What are your favourite other jobs of the past year or so?
Skaters Vote was a very important one for me to make, after I witnessed a lot of apathy toward the 2020 US elections within the skate community. We got a lot of good friends and skate icons together for that one.

What are you currently working on?
Writing on some new projects, while my existing narrative ones have been thrust back into limbo by current events.

What kind of work would you like to be doing in future?
Narrative. I studied fiction writing, and narrative is my first love. But also, any projects that let me explore fun shortform ideas!

Above: On-set of the Weezer 'All My Favorite Songs' shoot. "I loved the instant gratification of the practical effects and forced perspective gags."

What advice would you give someone entering your field?
Take every lesson as it comes, and make your own stuff as much as you can. Don’t worry about doing anything the conventional way - carve out your own path. If you make interesting work, people will notice, no matter what it is.

Vacation? Holiday? What are those?

Tell us something that we don’t know about you…
I once accidentally stood on a manatee.

When you’re not working, what do you like to spend time doing?
Skateboarding, rock climbing, taking care of eternal back problems and general bodily malfunctions.

Where did you go on your last holiday (or vacation)? And where would you love to visit?
Vacation? Holiday? What are those? It’s been so long now that I don’t remember.

During lockdown I relearned skate tricks I haven't done in fifteen years.

What’s the favourite/most rewarding part of your routine during lockdown?
Exercise. I lose my mind without physical activity, so last year I had to embrace doing home exercise in front of a computer screen, watching internet instructors. Walter Kemp from obefitness.com is my guru. I also ended up going skateboarding by myself a lot, and relearned some tricks I haven't done in fifteen years.

What’s the best movie (or movies) you’ve seen recently?
I loved The Sound of Metal.

What are your favourite music videos by other people in the past year?
There were so many. Off the top of my head, Oscar Hudson’s baby cake feast for Slowthai; and Nelson de Castro’s mirrored video for Always. That video had me grinning and shaking my head at its genius nonstop. True mastery.

Nelson De Castro's video had me grinning and shaking my head at its genius non-stop.

Favourite music artist(s), and favourite gig(s) in the past year?
I keep coming back to James Blake recently. And the most recent 'live gig' I went to, before Covid wiped them off the earth, was the one I invented for the Danny Brown & RTJ video for 3 Tearz. So much fun, with a horde of fans up close and personal to the guys. Can’t wait to experience that again.

And/or your favourite/most comforting food whilst stuck in lockdown?
I made many new types of cookies. And some homemade pizzas that we perfected.

Anything else you’ve achieved in lockdown that you wouldn’t have done otherwise?
We survived lockdown by dog and cat-sitting for a series of friends and family. We fell into a lucky rhythm; when one person would come home, another would ask if we could watch their pet. Even though we were still staying isolated, it let us feel like we were doing something exciting, by being in new homes that weren't ours, and getting to hang out with a bunch of dogs and cats.

So I got to have a lot of doggy time I otherwise might not have had. That's an achievement.

We fell into a lucky rhythm; when one person would come home, another would ask if we could watch their pet.

What’s your favourite political or charitable cause, and why?
The ACLU, because its fight against government abuse is something that America has sorely needed lately.

Best recent purchase?
A nice yoga mat that doesn’t stretch or slide under me. (Although it was a gift from my wife, since she knew I’ll use anything forever, no matter how far past its useful life it actually is.)

Work & Life - balance/ imbalance out of five (1 for imbalance; 5 for balance)?
Generally tending toward 1 when I’m deep within a project, but I’m working on that.

Mabel has vivid recollections of the night before, in Isaac Rentz's dazzling promo for Let Them …

Pedro Takahashi directs a disorientating trip through Chubby and the Gang’s world, in the …

Lady Leshurr links up with Todda T for the Euros 2020-inspired anthem 2Gether Now, as …

Bjorn Franklin and Johnny Marchetta direct a poignant exploration of love and togetherness, in …

George Moir is the ice cream van man with his own weird, wonderful range of ice lollies, in George …