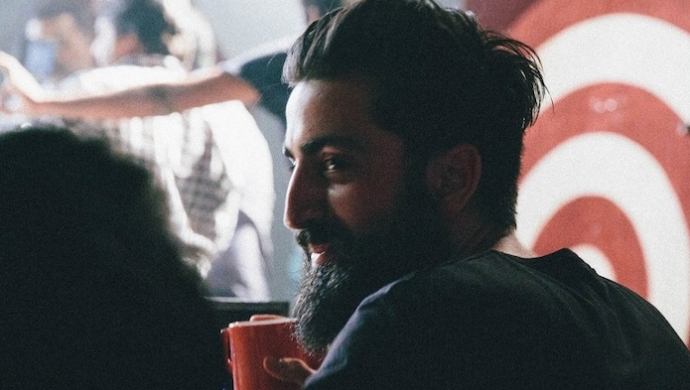 Now Michael, 26, is just about to start working with Sam Smith again as he tours and records the next album. High time, then, to give him the Questionnaire treatment. And find all about his shameful video directing past...

Education: GCSE’s and A-Levels in my hometown Nottingham. I took a gap year to do some work experience then just never ended up at university. The BBC was a big education for me as I was full-time since I was 18.

Favourite music video of the past 12 months? How can I NOT say Paolo Nutini's Iron Sky? I enjoyed U2’s Every Breaking Wave as well. Recently Ian Pons Jewell’s Vince Staples promo was wicked.

Favourite video of all time? I can’t possibly give you one answer: Justice's Stress, Etienne De Crecy's No Brain and Aphex Twin's Come To Daddy. Gondry’s Lucas With the Lid Off is up there too [Yeah! ed]

Favourite drink/drug: Lager & Acid (not together)

Last movie you saw (and was it any good)? Re-watched Black Swan for some lighting ideas. Great film.

Last gig you went to (and was it any good)? David Rodigan and yup – amazing.

Above: Michael (right) with Ady Suleiman on set of the State Of Mind video

What was the first music video you worked on - and what were you doing on that job? It was my A-Level media coursework and our tutor gave us a track by a rock band I’d never heard of to do a music video for. We filmed it in my garage at home with an ad-hoc projector set up. For what it was, it was good. I shared it on YouTube afterwards and within it week it had 500K hits. The fans thought it was a leak and it took off.

It’s online now with like 8 million hits and I purposely left out the band's name because it’s ultra-shite and I’m acting in it – I look like my auntie's girlfriend.

Favourite job of the past 12 months: I directed a series for MTV India, based in Mumbai, with Rayban & Sony Music which was absolutely insane. I got asked to direct a music video before leaving too - such a crazy experience working in Bollywood.

What’s the next Big Thing you’re working on? When I know, you’ll know. A feature length Documentary I made with Jake Bugg is pretty exciting. Documentaries are a form I see myself working more on going forward as I really enjoy making them and I have this ability to get truly into the heart of it capturing moments that make me think, ‘fuck, that was special.’

What would most improve your life? Mindfulness.

Best moment, or fondest memory, of your career thus far? I was full-time at the BBC when making music promos really took off. I called in sick to direct a promo for Benga. Flying to Amsterdam a day after to work with Jake Bugg returning to my 9-5 later that week. Hard work but crafted my career to what it is now. With filmmaking – I fucking love grading. I love the final process of each video, it’s really satisfying.

Worst moment? My first music video commission getting destroyed by feedback as I was on the way to the grade, from Nottingham, soon to realize that it was back to the edit for me and I had to get a train back home to pull apart a video I loved. Luckily that doesn’t happen anymore and I can just get the tube home.

Biggest frustration? That I haven’t made my best video yet.

What’s the big issue or issues facing music video makers right now? Have faith - you signed off an idea and everyone wants to make the best promo possible. There is no need to micro-manage. I am also pretty fed up at the amount of time-wasting. Just like the time you have spent reading this.

Person you most admire? Anyone who stands up for what is right.

What advice would you give to someone starting out in music video production? It won’t come to you – work work work. The more experience you can get the better. Also, don’t be a dickhead – be nice to everyone.

Any hot tips on who will be the future stars in music video in the next couple of years – directors or otherwise? I’ve just started working with Eva Arnold – very excellent DoP.

Léo of Megaforce on Rihanna's BBHMM video: "I'd lie if I said it was easy"

As the main man for music videos at FAMILIA in London for the past two years, Ryan Morgan has been building on the company's well-known strengths.

Alex + Plex Studio direct a lucid dream of a performance video for Beatrich.

When robins appear, it's a sign that someone is grieving, and that they need comfort. …