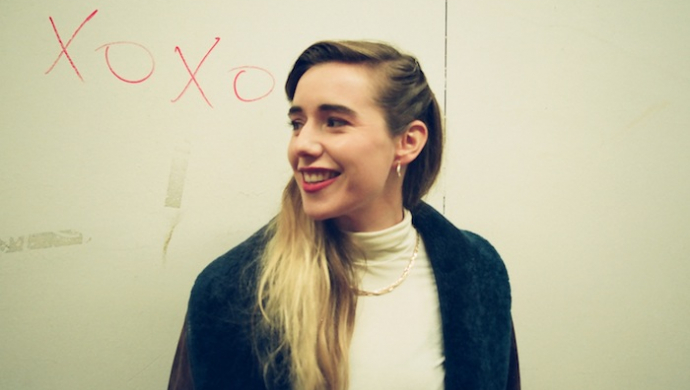 Lucy Luscombe has won praise and prizes for her short film work, including a prestigious BFI Future Film award. Her music video directing debut for John Grant's GMF garnered a nomination at the UKMVAs in 2013, and her promo video for Tiny Ruins' Carriages was shortlisted at this year's MVAs. Her latest is a sassy, witty pop video for Juce's 6th Floor, which suggests this talented 28 year old from South London (now resident in East London), is going to have a very busy 2015. So we thought it was a good idea to ask Lucy our usual set of questions now...

Previous occupations: Cigarette girl, shop girl, I worked on a number of club doors doing guest list or fashion police where I would regularly get bottles thrown at me, I deserved it. Whenever something shitty happens I take it as karma for ruining someone's night in 2007.

Favourite music video of the past 12 months? Washed Out - Weightless by David Altobelli.

Favourite food/restaurant: I’d rather take a bar with good snacks. That’d be Trisha’s and this hokey joint Le Beaujolais that serves up a similar spread as seen in Abigails Party; cold meats, warm wine, good times.

Last movie you saw (and was it any good)? Stations Of The Cross by Dietrich Bruggemann - haunting, great. Will stay with me for a while.

Last gig you went to (and was it any good)? I wound up at this outdoor MC Battle thing on Friday which was odd but enjoyable. I liked that all the dudes kept their back packs on whilst performing and got mad earnest when rapping about chicks.

What was the first music video you worked on - and what were you doing on that job? I went on this crazy adventure with Ferry Gouw to Death Valley to shoot a video for our friend Dev Hynes who was doing Lightspeed Champion at the time. I was on choreography and make up, not qualified for either but no one got an eye infection and all the dancers moved great once the shrooms wore off.

Favourite job of the past 12 months: They’ve all been so different! Best moments would include shouting direction over Depeche Mode to Nico Mirralegro and Ian Hart in a Southend Hotel Room. Co-ordinating five double-decker buses into a semi circle at the crack of dawn for Blood Orange and Skepta, shooting with snakes and kittens in a buck wild pet shop for Juce. Working in LA was fun, so efficient.

What’s the next Big Thing you’re working on? I’ve got some great promos lined up for January, more commercials and shooting a short I’ve written.

What would most improve your life? I need to vocalise ideas to untangle them, I’ve got a couple friends who humour me but it would be great to have a sounding board for hire so I’m not concerned with boring people.

Best moment, or fondest memory, of your career thus far? There’s been a myriad of satisfying moments in which I’ve got to work with wonderful actors/artists or finally realise shots I’ve been hankering after. But, I’d have to say that forming a great crew of talented individuals who I trust and bring so much to a production has been very fulfilling. I’ve got such fond memories of seeing their faces through the chaos and laughing about it after.

Worst moment? Trying to persuade a kid they should ride a mini moto without a helmet before coming to my senses. Both a professional and personal low.

Biggest frustration? The treatment process can be frustrating. I feel a little more communication could save everyone a lot of time.

What’s the big issue or issues facing music video makers right now? Great things can happen for 50 quid but it’s gets to a stage when you have to ask yourself, “Is it fair to be asking people to work on a token fee, again?”

With the indication that great music videos still matter given Youtube hits are beginning to be taken into account in the charts, it’s time the funding model evolved also.

Person you most admire? Camila Batmanghelidjh who founded Kids Company and other maverick advocators of social change who like her, have selflessly devoted their lives to transforming opportunities for the neglected, overlooked and ignored within our societies.

What advice would you give to someone starting out in music video production? In regards to directing, hit up any musicians you know who might want a video and grow with them. Learn from watching directors you rate, look at the structure of their videos - the shape of the story - the shots they choose and how they cut between them. Know that you have a different approach, you are unique, you are you - lets see it. Trust your instincts on that. Take advice from people, seek honest feedback and listen but don’t look for validation, you will get lost. Be polite and kind to the people who are helping achieve your vision because they will be doing it for free and you want to work with them again. Always send a thank you after the shoot to everyone involved.

Any hot tips on who will be the future stars in music video in the next couple of years – directors or otherwise? They’ve done a fine job of establishing themselves over the last couple years but I can’t wait to see what they do next: Simon Cahn (Director), Hans Lo (Visuals/Editor), Jack Wilkinson (DP), Lucie Red (Art Director).

In this leftfield love story, Miles From Kinshasa and Kadiata cautiously forgo their safety in the …

Josh McCartney directs Magic Medicine, a slice of retro-pharmaceutical brilliance from the …