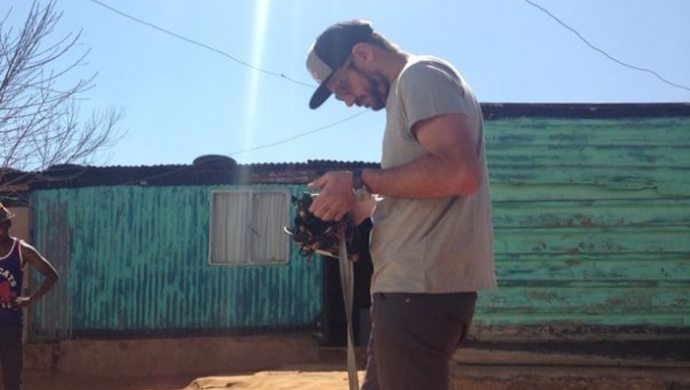 With a run of successful videos last year, particularly two huge view-magnets for Sigma, Craig Moore became a new force among London-based pop video directors, and won an MVA to boot. He's now had a great start to 2015 too, with his videos for Tough Love, Conor Maynard and Ella Eyre. Born and raised in South Africa, Craig directed TV in Johannesburg before heading to London. He became one of the founding partners of new production company FAMILIA two years ago, and then represented by Marisa Garner at MGA, which provided a catalyst to his music video directing career. Craig, 35, now lives in London Fields.

Favourite music video of the past 12 months? Skrillex – Ragga Bomb by Terence Neale; Alt J – Hunger Of The Pine by NABIL

"Favourite drug is surfing. Nothing beats paddling out with friends and sharing waves amongst each other, away from the sounds of the city."

Last movie you saw (and was it any good)? Fast & Furious 7. It was okay. Standard action flick and a nice send off for Paul Walker.

Last gig you went to (and was it any good)? I went to see Sigma on Saturday at the Brixton Electric. This was the final stop on their live show tour and they didn’t disappoint. It was epic and great to hang out with the guys after working with them last year.

Currently reading/favourite book: I’m currently reading Werner Herzog: A Guide for the Perplexed, which is a profound insight into the mind of one of the masters of filmmaking. He is super-descriptive and takes some risks whilst making his films that we as music video directors can relate to.

What was the first music video you worked on - and what were you doing on that job? Dizzee Rascal – Dream. Directed by Dougal Wilson, who has been an inspiration to many young aspiring directors, including myself. Adam Farley and me were runners for Chris Kelly and the shoot went on for 24hrs – 6am to 6am… see ya later. Welcome to music videos. I could hardly stand by the end of it but I still loved every minute.

Favourite job of the past 12 months: Shooting with Sigma and Paloma Faith in Miami last year was awesome. It was her idea to explore Miami as a location and it is one of my favourite cities. We went back for Conor Maynard this year but it was that initial trip that blew my mind.

"The art deco vibes on South Beach are cool but Wynwood is another level. So many rad murals and the blanket graffiti just brings it to life. Paloma was really cool too and made the whole experience really enjoyable."

What’s the next Big Thing you’re working on? I have been pitching on some really cool projects lately so hopefully I can report back soon with some good news and a brand spanking new video. Maybe you guys can even post it on your site?

What would most improve your life? Living by the beach. I love London for so many reasons but I’m tired of driving 4 hours to surf.

Best moment, or fondest memory, of your career thus far? Winning a UKMVA for The Renegade last year was pretty special. It was funny going to the awards because I had never been and the FAMILIA guys were teasing me saying “have you prepared a speech” and “what you gonna do if you win” and I thought I would just see what everyone else does and take it from there.

Anyway, it turned out that my award category was the first of the night. Fuck. There goes my plan! So myself Sophie Brooks (producer) and Caroline Clayton (commissioner) went up and collected the award and I remember stepping off the stage and hearing Adam Buxton ask if I wanted to say something. Shit- it was too late to turn back. I was like, nah… and then the other winners vetoed their acceptance speeches until Emily Kai Bock restored order. Fun night.

Worst moment? I haven’t had anything hectic happen, a few bumps but nothing that has slowed me down. Losing rushes would be pretty horrible.

It’s tough when you get attached to a certain idea and you can totally visualize every frame and it feels like the perfect fit for the soundtrack. I try not let it get to me though as I feel lucky to even be considered for some of these jobs.

What’s the big issue or issues facing music video makers right now? Time and money are the obvious issues but creativity and originality are other issues that music videos directors have to deal with.

What advice would you give to someone starting out in music video production? Don’t underestimate the power of learning, watching and developing your own style. I was lucky to work with Directors like Dougal Wilson, Michael Gracie, Jake Nava, Dom & Nic. The age of digital has made it easier to just go out and film/edit something.

"Find an artist who needs a video and pull the trigger."

Any hot tips on who will be the future stars in music video in the next couple of years – directors or otherwise? FAMILIA is becoming a serious contender in the promo world. Their directors are all talented, hungry and capable of working with any budget.

Oscar Sansom directs a melancholic live promo for Liam Gallagher's All You're Dreaming Of.

Gus Dapperton and Channel Tres aren't quite cut out for the real estate life, in Kevin Lombardo's …