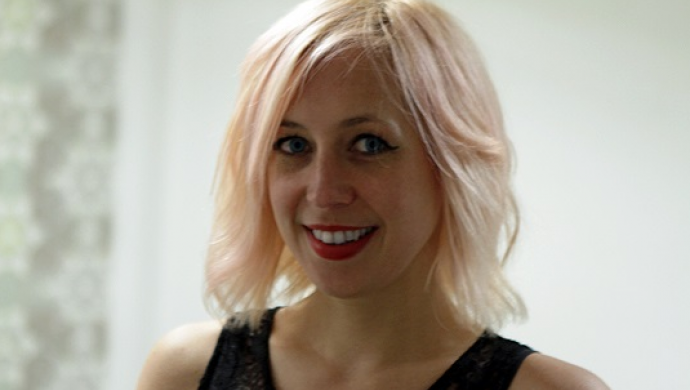 Our latest Questionnaire respondent is Amber Millington, head of music at Agile Films. Just in the past year or so, Amber's producer credits include videos for The 1975, Klaxons, Ella Eyre, George Ezra, Paolo Nutini and Drenge - and she's exec produced several more. She has a few UKMVA best producer nominations under her belt too. Amber grew up in one part of north London (Barnet) and now lives in another (Tufnell Park).

Education: I did an Art Foundation course at University of Hertfordshire, then went on to study Film Studies at Middlesex University

Favourite music video of the past 12 months? I thought Sia’s video for Chandelier was stunning

Favourite video of all time? I could watch Unkle’s video for ‘Rabbit In Your Headlights’ every day. I’ll never tire of the dramatic ending!

What are your favourite publications and websites? I like to keep up to date with new music and cool music videos on websites like Pitchfork and (of course) Promo News!

Favourite drink: I will never turn down a glass of prosecco

Last movie you saw (and was it any good)? The Godfather – I have to admit it was for the first time!

Favourite directors? Not very imaginative choices, but I genuinely love the work of Alfred Hitchcock and David Fincher

Last gig you went to (and was it any good)? Billy Bragg at Hammersmith Apollo – he was fantastic!

Favourite bands/artists: For a long time my top three artists have been: Billy Bragg, I Am Kloot and The National.

Previous occupations: I worked in a gift shop, but my favourite job before Agile by far was working at Pizza Express!

What was the first music video you worked on - and what were you doing on that job? The first video I worked on was The Concretes and their video for ‘Kids’. It was my first job as a runner on a music video and I was really looking forward to it, but I ended up leaving the shoot thinking I wouldn’t work on another music video!

"I find myself telling the directors: 'Don’t worry, we’ll make it work' which is often quickly followed to my colleagues: 'why did I just say that??'"

Favourite job of the past 12 months? I loved producing Superfood’s ‘TV’ video for Zac Ella. The band are excellent and four of the nicest people I know, and Zac’s always a pleasure (and a laugh) to produce for.

What’s the next Big Thing you’re working on? We’re shooting a music video for Charlotte OC which we’re very excited about. It’s directed by Georgia Hudson who’s having a really busy year so far making some gorgeous videos.

What would most improve your life? It’s an oldie but a goodie: bigger budgets!

Best moment, or fondest memory, of your career thus far? My favourite job will always be producing Aoife McArdle’s video ‘Isles’ for Little Comets. There was only four of us in the crew and we traveled all over England and Northern Ireland which not only produced a brilliant video but was one of my most memorable experiences.

Worst moment? Arriving on set in LA to shoot and finding out the City of LA had made a mistake and granted the parking suspension for the wrong day – so the 1st AD and I spent the next three hours tracking down the owners of all the cars and pleading them to move for us!

Person you most admire? I have a lot of respect for my partner in crime Kat Cattaneo, mostly because she does a great job but also because she puts up with me!

Your favourite (or most overused) phrase? I find myself telling the directors: “Don’t worry, we’ll make it work” which is often quickly followed to my colleagues: “why did I just say that??”

What advice would you give to someone starting out in music video production? My advice to someone starting out in production would be to work really hard and make sure people remember you, for the right reasons. I worked for free for quite a while, but I worked hard and tried not to complain because I knew it would be worth it – and it was. The main quality you need is common sense, if you have that the rest is pretty easy to pick up.

My main advice for any aspiring directors would be to, again, work hard but also make as many videos in your spare time as you can – because along with talent, practice really does make perfect. You may cringe at your earlier videos one day but it’ll be what you learn from them that makes you a great director in the long run. Also you shouldn’t feel too shy to approach up and coming artists to make videos for them, they’ll be flattered their music inspires you!

Any hot tips for future stars in music video, directors or otherwise? It’s not very modest of me but I have to say that I’m very excited about the talent that we’re developing here at Agile. I obviously can’t name names as that would be like choosing your favourite child but we’ve had a real influx of truly skilled directors over the last year or so. They constantly surprise me with their imaginations and creativity. I’m excited every time I receive one of their treatments and I think they’re all destined for great things.

It's predator vs prey in Freddie Wright's horror-tinged vision for Khazali.