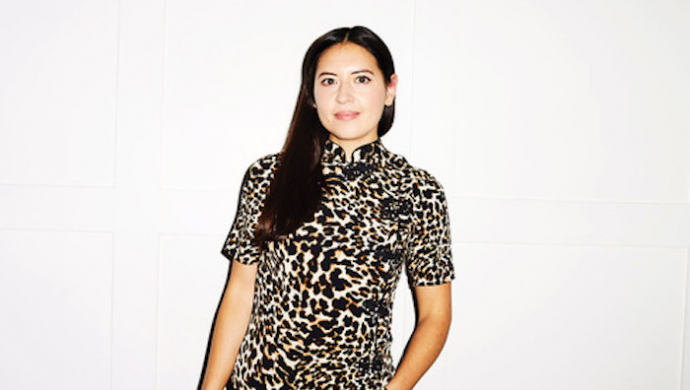 With her expertise and versatility in mixed media animation, it's not surprising that Gemma Yin has been busier than most people during the lockdown. Indeed, Gemma has directed one of the standout videos of Quarantine Time, for dynamic Bree Runway.

When she's not been working, she's been making face-masks... and then enjoying some quality time with her boyfriend Pierre and her puppy Pacho...

What were you working on before the lockdown?
We had shot the music video for New Rules' Pasta with the band in late February, so I was working on the edit and animation for that when things started to change. I didn’t know at the time that it would be my last shoot for a while!

I've always known that I am an introvert and enjoy my down time in my own space.

What are you working on now?
A lot of music video briefs came in for me just after lockdown once people had a chance to gather themselves and pivot to a different approach for their projects. Mixed media and animated approaches have become the go-to, so I was getting a lot of enquiries.

I have just finished work on two lyric videos, and one main video which we managed to shoot in quarantine conditions. We managed to pull off some magic on that one, despite the unprecedented constraints, for Bree Runway's Damn Daniel. I also have a couple of fashion projects coming up, but retail has been the hardest hit, so I think it has taken a little longer for brands to adapt.

We managed to pull off some magic... for Bree Runway's Damn Daniel.

Outside of my regular work, I am sewing face masks. I used to make knickers for my friends at Christmas time, so already have lots of fun fabric and sewing supplies here. I am also doing some remote mentoring sessions for young creatives who need a little guidance on how to kick-start their careers. It’s going to be tough times ahead economically, so it’s imperative to give the next generation a leg up where possible.

What's the most surprising, or least predictable thing, that's happened to you during quarantine?
I have become obsessed with the Disney renaissance films again - the blockbusters from my childhood in the 1990s! I’m not sure where this nostalgia craving has come from, but I have watched all of the original ‘making of’ docs. I got very emotional while listening to The Circle Of Life and visualising myself in the audience at The Lion King musical - which I have not yet seen - in a future where we can go to shows again. Random!

What's the favourite part of your daily routine?
I am fortunate to have a puppy to take out on walks - he is my ticket to freedom! He just turned a year old, so had his birthday in quarantine. We get out for daily walks which is a great time to get some fresh air and take a break from the quarantine grind.

I'm doing some remote mentoring... tough times are ahead so it’s imperative to give the next generation a leg up where possible.

Are things getting harder/better/staying the same?
I can’t complain about anything, as I haven’t experienced any personal difficulties despite the wider crisis. I am lucky to have a nice home, and work still coming in. My partner made it back from a work trip abroad when things started to shut down, so I am not short of company. My loved ones are safe and well. I would say things have been good, and are still good.

What have you learned about yourself during quarantine?
Whilst I wouldn’t go as far as to call myself socially awkward, I have always known that I am an introvert and enjoy my down time in my own space. This has made me particularly resilient to the challenges that many people are facing in social isolation. Given that the world is on pause, I have found it freeing to not have the pressure to make social commitments and fill up available space in the calendar. The loss of control has been good for me!

Best meal you have eaten/are regularly cooking (send photo, if poss!)
I’ve been eating well, but I can’t recall anything that has been stand out.. I had a quick scroll through my pics in search of anything and saw this one of my dogs birthday breakfast of kings (scrambled egg, sausage, bacon, crackers and kibble - also a small cup of tea!!). I can honestly speak for him when I say that this has been a culinary highlight of his short life!! It is definitely an upgrade from dry kibble.

Best thing you’ve watched, or heard, while on lockdown, and why? And the worst...?
My boyfriend got me into watching Brooklyn Nine Nine, the goofball NYPD cop comedy. It’s not something I would have chosen to watch but I am completely hooked and in love with the characters. The moral code of the characters is strongly rooted in friendship and loyalty which feels especially poignant right now, and I also believe that comedy is a great antidote to the current state of chaos.

The worst thing I’ve watched is that film that came up on the Netflix homepage the other day - ‘Extraction’ with Chris Hemsworth. What a stinker!!

How's your Work/Life balance at the moment?
It’s not balanced! I am working too much. But luckily there is no fomo to be had, because picnics, parties and sunbathing are out.

• Gemma Yin makes films through Greatcoat Films, and is represented for music videos by Las Bandas Be Brave. Watch her reel here.

Femi Ladi directs a thought-provoking promo for Guvna B and D Double E.