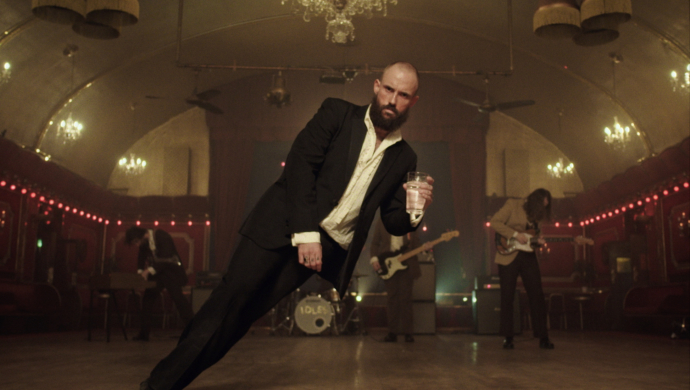 A few months ago, up-and-coming director LOOSE got together with Bristol post punk outfit IDLES to direct the video for Beachland Ballroom. The collaboration has now produced three separate videos for the track - the latest being the Director's Cut - featured on Promonews today. We spoke to LOOSE, to get the full story.

When Beachland Ballroom dropped in September - the first track to be released from the new IDLES album CRAWLER -  so did a powerful one-shot video. It shows the band's charismatic frontman Joe Talbot in extreme close-up, while performing the song.

Or at least he is attempting to do so. In fact, Talbot appears to be on the verge of collapse - straining and sweating, utterly exhausted, his lipsynced vocals emerge through gritted teeth. The camera unflinchingly captures some kind of ordeal.

Then, a few weeks later, another video for the song appeared: 'Official Video Part 2'. Here is another performance by Talbot - this time with the rest of the band, actually in a ballroom setting. Also this time, Talbot's movements are hampered by an invisible force, that's dragging him backwards.

The relationship with the first video is clear - it's the same setting, but taken from a different, wider spot. It fully explains his pain and exhaustion in 'Part 1'.

And now we have the third video for the song, and its perspective is wider again. In the Director's Cut, its not just a single performance, or location. This time, we have different expressions of the central device suggested in the first version and revealed in the second version - this invisible force, dragging Talbot backwards.

It's now even more obvious that the effect is created by something genuine, that is pulling the singer back - bungee ropes, in fact - and then removed in post. And it also expands on the dual impact of the effect.

It's clearly a problem for Talbot, a force that causes him no end of trouble. But let's face it, it's also visual, highly physical comedy, of a high order. In this version, Talbot adds another side to his personality, a greater element of Buster Keaton-style silent comedy hero.

Same band, same director, same song... three videos, all connected, but all work on their own terms too. It's certainly an unusual kind of trilogy - so we asked LOOSE about how it happened.

Promonews: Clearly the thing that is common to both 'Official Video - Pt 2' and the Director's Cut (and actually 'Pt 1' too, but we don’t see it) is how Joe is being dragged back by that powerful invisible force. What was the thinking behind that? And how did you achieve it?

LOOSE: The whole video came from a conversation between Joe and I about the track, and how it’s about his past drug  addiction. He said in some ways, he felt like he was walking through life as if he was invincible, but ultimately, his  substance addiction was slowly tearing him apart.

The idea came from a conversation with Joe about his past drug addiction.

The bungee analogy came quite naturally from this. You can be on top of the world and seemingly normal, but suddenly you hit a point of resistance and it drags you right back. As the video progresses, this becomes more intense and physically Joe deteriorates.

We achieved this effect using a lot of human strength on set - shout out the runners! - some smart costume design, a smart rigger and VFX.

Two different videos released for The Beachland Ballroom, and now a Director’s Cut. What’s the story behind this unusual situation?

We never really planned for there to be three versions. But as the edit process unfolded, we found that certain scenes told such intense stories they were stronger standing alone. They acted better alone. As the treatment for the video was written around a concept, as opposed to a narrative, this definitely felt like the right thing to do. It was completely fine to me. The video was an experiment into how far we could push the bungee concept and the rollout reflected our greatest results.

It’s unusual to release multiple parts to videos. But the fans seemed to really feed off it, and the response was exactly what I wanted. The YouTube comments are full of fascinating interpretations of the track and videos, and the multiple releases only propelled the dialogue which feed off the differing perspectives.

I sat Joe down, and asked him to perform the track one last time.

Part 1 is actually the very last thing that we shot. Being tugged around by the bungee cord was exhausting for Joe, and by the end of the shooting day he was completely in pieces. Joe’s feet were wrecked from an ongoing foot injury, and we had to pull a couple of shots because he was struggling to stand up for too long. I sat Joe down, and asked him to perform the track one last time. The shot was uncomfortably tight and I shook the camera myself on the tripod to replicate the shakes Joe had.

Originally, this was just meant to be a cutaway from the video, but the team saw it and felt the intensity of the one shot conveyed the emotion of the song in a way that we could never have planned for.

My original film was all about a developing pain and frustration from having an invisible force constantly fighting against you. The shot of Joe’s distraught eyes singlehandedly embodied this pain in a completely authentic way, which could have only been achieved on such a physically gruelling shoot day.

Joe looks genuinely exhausted. Was it always your intention to get that shot? And was its intensity the reason why they wanted to go with that as a one-shot?

Joe was completely exhausted! My plan was always to get this shot, however when we got to it we literally had five minutes before the location was closing and shutting their doors on us. This added an extra added layer of urgency which meant we only had one chance - I was left to operate the camera and light, as everyone was packing down the kit. The intensity ten-folded, and we literally did one take.

The hurt you can see from Joe is entirely real - he’s covered in sweat and his eyes look ruined. He watched the footage back and saw the version of himself the track is written about. The coherence of this feeling, image and song made it a no-brainer to launch with!

The way in which this idea this was conceived meant that we had to be just as reactive with the delivery and birth. The whole decision-making process, for the whole team, was about doing what felt most right for everyone involved.

Above: shooting the band performance at The Rivoli Ballroom, with frontman Joe Talbot attached to bungee ropes. Photo: Tom Ham

So what was the thinking behind releasing the ballroom performance as a version in itself for Part 2, and then the Director's Cut?

The second part of the saga is more straightforward. The band loved the ballroom scene and felt that the effect of Joe fighting the bungee, unclouded by the different locations, told the story of the concept most effectively.

After associating the track with such an intense pain in the first video, the band wanted to continue with the simplicity of using a single location for the second part too. They actually edited this one themselves!

The DC was actually our first version of the video to be edited.

And I’m not usually a fan of a Director's Cut - I can rarely tell the difference from the original client cut! - but in this case, I had so many shots pushing Joe’s altered physicality further, that the edit created a whole new narrative. I was felt keen to release these to act as a bit of a resolution to parts 1 and 2.

Where did you shoot the video?

We shot all but the ballroom in the Crystal Palace Stadium. Joe’s only request other than the ballroom was that we worked within Brutalist structures - this runs throughout all of their visuals. The cohesive and regimented structures really contradict Joe’s hectic and disorderly movement, which added to the portrayal of his incoherent physicality. The ballroom was the Rivoli in Brockley, a legendary spot.

How hard was it to complete the Director's Cut, especially as the other versions have performed very well?

The DC was actually our first version of the video that was edited. Everything else was deconstructed backwards. I’ve been so excited to put it out because the two different parts have had fascinating interpretations and feedback attached. Hopefully, this gives a third angle to the story. And big thanks to our editor, Ed [Cooper at The Assembly Rooms] for sticking with us in the edit.

How happy are you with the DC? Will there be any more versions?

I love the DC! It offers a more in-depth study on Joe’s physicality in Part 1 and 2, which allowed me to push the concept even further!

• LOOSE is with Stink Rising for music videos, and represented for music videos by Hands London. Check out more of her work here. Full credits for the Beachland Ballroom videos here.

Promonews talks to Biscuit Filmworks' director Ben Strebel about the combination of passion, ingenuity and trust that went into making his remarkable video for Skrillex, Four Tet and Starrah's …

Charles Mehling - director, photographer, and former bass guitarist of The Brian Jonestown Massacre, a rock band with a famous Rolling Stone referenced in their name - has now, finally, made …

Douglas Bernardt's new 15 minute short film/music video Sonho tells the extraordinary story of Brazilian musician Nego Bala, who was incarcerated in a terrifying juvenile jail when he was just …