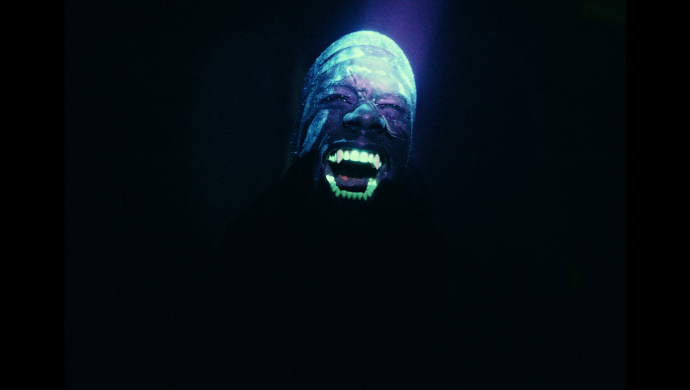 Shan Phearon's appreciation of the power of popular cinema has influenced his music video work for the likes of One Acen. and Ocean Wisdom. Now he has fused one of the most popular film genres with the conventions of the grime video, with sensational results.

Phearon's new video for Tiggs Da Author & Nine's Fly 'Em High creates a world that's both familiar and unique. It's set in a trap house with bad boy gangsters, who also just happen to be vampires, existing within their own set of arcane rituals.

The intriguing scenario is the jumping-off point for a remarkable visual experience, where delivered with disorientating unpredictability. Both claustrophobic and luridly colourful, with elements of humour and even poignancy, Tiggs is the observer of proceedings, chronicling the deeds of this fanged quartet - and possibly providing their salvation.

So we popped over a few questions to Shan about the making of this outstanding video - a Greatcoat Films production that was all shot in one house in Harlesden, north west London, back in January.

Promonews: What was the inspiration for your vampire gang theme? Anything in the song and the brief that led you in that direction?

Shan Phearon: We just dialled into the narratives of the wider album campaign and Tiggs’s innate brand as an artistic outlier, and took those for a spin. The album has a thought-provoking title: Blame It On The Youts. Cinematically, I love when societal ideas are Trojan horses via high concept ‘genre’ entertainment. The exploration of ‘serious topics’ needn’t always be over-earnest or arthouse stilted - Korean filmmaking is a fave example of warping the tonal expectancy bit.

So it spun into Vampirism mythology meets Roadman mythology. Top Boy by way of The Lost Boys was thrown around. There’s definite metaphorical crossovers between the ‘urban crime thriller’ genre and the vampire genre. My producer and I were talking about ‘alternative’ vampire stories too, and we’d count Queen Of The Damned, Blade and the rest on one hand. It felt a liberating exercise to add lore.

Beforehand, I fleshed an entire backstory for the characters and the world-building. There are Easter eggs throughout that hint. Conveying a demo of the bigger idea inside a three minute format is always a unique challenge...

Tiggs is one of those unorthodox, brave artists every creative loves to work with.

How much did you collaborate with Tiggs in the creation and pre-production stage?

It was an open brief and Tiggs is one of those unorthodox, brave artists every creative loves to work with. I pitched the concept to Tiggs, George (Tiggs' manager) and Steve Rose (commissioner) and they loved it from the get-go. They wanted us to push beyond expectations of serviceable ‘fast food’ British rap video content. Tiggs and I had a chat, vibed and they allowed my creative team and I to do our thing encouragingly.

I think when there’s a genuine dynamic like that - artists and labels working towards shifting culture forward and inviting audiences for a different ride - that it's an exciting attitude.

There's a sense that this is some kind of cult - one foot in reality, one foot in somewhere uncanny. Can you give some background and insight into the gang's world: the characters, their activities and rituals?

With mythological crossover, it’s looking for parallel details. All black attire of vampires vs. all black uniforms in street culture. Nocturnal lifestyles. And blood. Road life through a vampirism lens might be: blood cooked like crack, stashed and sold in bottles, blood bags, or as red powders, or in capsules. Addicts want to procure it. ‘Opps’ (the opposition) may lose theirs.

These might be young boys that had lost their lives to street-related activity in previous years.

There may also be notions of getting high and low on one’s own substance compulsions and very subtle nods to (the establishment’s) engineering of drug misuse in challenged communities. And also posing the question: what’s the nihilistic nightmare of the West when it comes to characters like this? It's poking fun at that viewpoint. Lots to explore more one day perhaps in longer form.

To motivate performance, part of the backstory I shared with the four leads was that these might be young boys that had lost their lives to street-related activity in previous years. Yet now having to exist as vampires (a post-death trauma state), they inhabit this limbo trap house. The bigger metaphors: vampires are trapped in an unchangeable state which both gifts and curses them - much like the cycle of 'the trap’ sometimes for young people.

Where did you shoot, and how long did you have? What were the main challenges you had on the shoot?

One day, in a tiny house.

The main challenge was filling one minute of the video across Nines' verse upon finding out he couldn’t make it due to flights/quarantine time, etc. We had a meticulously planned storyboard with his presence. So I rewrote and replaced him with a skeleton and a milk carton (lol). It’s a reference to a skeleton dressed as a gangbanger in Tales From The Hood, an ahead-of-it’s-time 1995 Spike Lee-executive produced horror anthology with socio-political themes. We basically frame Nines as a victim of the gang that’s been honeytrapped for blood extraction… it’s reflexive satire.

Nines couldn't make the shoot. So I rewrote and replaced him with a skeleton and a milk carton.

Remarkable colours in the video. Were you able to achieve those mainly in-camera, or did you greatly enhance in post?

Well, I enjoy colour that pops through the darkness; it reminds me of walking around London late at night listening to albums as electricity runs through it. The city isn’t grey and muted like the day - it’s the extreme opposite, like synesthesia, or bi-polarism.

Plus, isn’t all ‘reality’ now engineered? ‘Authenticity' a fallacy? So finding artificiality to try and explain reality can be interesting subtext.

There’s a technical process I’ve been developing to push things from in-camera to post. I kind of miss 2000s cinema where everyone would crank the shit out of images because digital colour grading was in it’s experimental infancy (and probably because they were shooting film). I feel it’s dope for creatives to test conventional trends of their space (i.e. sometimes muted palettes, soft black levels, etc) and go the extreme opposite way - if it services story and authorship, obviously. I can appreciate ‘punk’ attitudes.

I trained the boys - all newcomers - over a week, and then they were told to let rip.

My delighted Greatcoat Films' producer Kareem Adeshina exclaimed the hi-res screenshots folder "looks like Skittles”, and that’s why he’s my rock I suppose(!) All I try and do is get everyone on the same page with 'mood fusions’ before we go into the field.

The edit is breathless. Did things turn out the way you originally planned?

I think it’s cool for editors to think sometimes about how to experiment with the edit so it speaks to the viewing experience for an accelerated generation in an accelerating future. The music video format is beautiful for that - historically innovative and fertile ground for creative experimentation and messing with narrative form.

Depending on the project, but if it’s a modest music video project with time limits, it can help discovery-mode to mix methodical shot listing/storyboarding with just the tiniest room for improvisational manoeuvres.

I was also really proud of our talent. The 4-5 newcomer young boys I cast especially, who are 17-18 years of age. Training them over a week, they were told to let rip. Here's hoping they have bright futures in film and beyond.

Director Joe Wheatley and TV Priest frontman Charlie Drinkwater explain the video for Press Gang, a tragi-comic depiction of a grimy past that resonates in the filthy present. It's got legs!

It's not ideal trying to launch your directing career during a pandemic, but that is what Maxim Kelly has managed with notable success in the past few months. And teaming up with editor Charlie …

Alex Takacs, aka Young Replicant, has long been recognised as a master of enigmatic narrative. In music videos for the likes of Alt-J, Flying Lotus, Purity Ring and others he creates worlds …

James (aka Ja) Humby is onto something with his live performance series Molten Jets. In outings for the likes of Horsey, Ross From Friends and King Krule he established the distinct …

The Reids direct a cyclical promo for Rasharn Powell's Blunder.

A growing cast of characters repeat the same routines within a single room, oblivious of each …

Sleepy Soul go on a musical road trip in Dustie Carter's promo for new release Self.

KC Locke directs another cracker for AJ Tracey, capturing his superstar lifestyle in a …