Behind the Sam Dew trilogy by Young Replicant: "Understanding is secondary to feeling something." 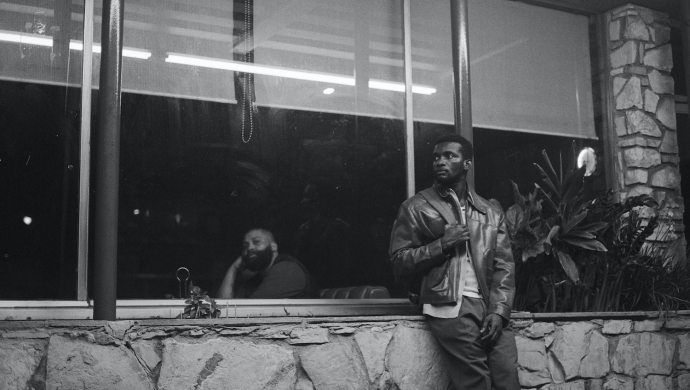 Alex Takacs, aka Young Replicant, has long been recognised as a master of enigmatic narrative. In music videos for the likes of Alt-J, Flying Lotus, Purity Ring and others he creates worlds where the viewer is drawn to the characters and the sense of place, but also tested by a less conventional, more unpredictable reality.

Young Replicant has now created another of these tantalising worlds in a new trilogy of videos for up and coming soul singer Sam Dew - his first since his evocative videos for Leon Vynehall a couple of years ago.

The director reunited with DoP Dustin Lane, his collaborator on the award-winning Alt-J video for 3WW, to shoot the videos back-to-back in late 2020. In the lead-off video for NTWFL, he establishes a mysterious nocturnal world, where a quiet army of night workers (or possibly angels) are going about their business of prompting memories and emotions in the rest of the population. The video predominantly features actors Oprah Wambui and Joseph Otsiman - who briefly encounters Dew sitting in a diner (both seen on set above).

In the second video for GONE, Dew now takes centre stage, in the diner. The world has become black and white, and has a strong sensibility of film noir as a night-working engineer (played by Tony Todd) disregards his own mortality when dealing with overhead electrical cables.

Finally, in the third part of the trilogy for DJ, a woman (Doree Seay) leaves a supermarket at night, and drawn by a man she sees in the car park to a giant screen - and that man (Nyang Reat) is now an image on the screen, on a beach. Then she is transported to the beach, and joined by Sam Dew.

With this wonderfully realised interconnecting set of music videos now all released, we got in touch to Takacs, aka Young Replicant, to talk about the development and execution of the Sam Dew project.

What was the inspiration or starting point for the concept? Was this something that you developed with Sam Dew or developed by yourself from his brief?

YR: I always try to make sure the idea follows the music. The first single, NTWFL has a dreamy doo-wop quality that's romantic but lonely, full of longing that spans a great distance. It has lyrics about cell phones but an organ sound that reminds me of old rocksteady tunes; textures of the future and the past combined.

Sam’s brief mentioned night-time and circular narratives. I tried to put all that into one pot.

Above: Still from the video for Sam Dew's NTWFL, directed by Young Replicant and shot by Dustin Lane

I’ve always been drawn to the cultural metaphor of an unseen labourer responsible for everyday occurrences.

A lot of my concepts come together in fragments, so a single inspiration is hard to pinpoint. Some early keywords I wrote down were 'nocturnal communication', 'the annunciation' and 'sandman'.

I’ve always been drawn to the cultural metaphor of an unseen labourer responsible for everyday occurrences, like falling asleep or falling in love. I wondered if that labour would eventually get outsourced, if precarity and alienation exists in the dream world too.

Above: Oprah Wambui, who plays 'The Writer', on set of the NTWFL video

Was this originally presented as a trilogy or series, or did it evolve after the first video was made?

The whole trilogy evolved on paper way before anything was shot. The first treatment I wrote was for NTWFL, and that established the world. Sam and the label liked it enough to ask me to write on GONE, where Sam was to have more of a starring role.

The world got bigger and new characters emerged in an organic way. It felt natural to round it out with a third part [for DJ] that told the woman’s story.

Above: Still from the NTWFL video

[The cards, designed by Gabbie Bautista] were so well done we started coming up with more ways to include them in the story.

Is there a backstory to your cast of characters? What else can you tell us about them?

Each has their own role to play in a nocturnal economy of desire. Some look for meaning in their work, others are just punching the clock. For the purposes of the script I had to give them each some kind of title.

In order of appearance there's The Writer (Oprah Wambui), The Messenger (Joseph Otsiman), Sam (as himself), Gia (Doree Seay), The Contractor (Tony Todd), and The Ticket Agent (Nyang Reat).

Above: Joseph Otsiman playing The Messenger, during the NTWFL video shoot

Where did you shoot the Sam Dew videos? How much research goes into your choice of locations?

We shot mostly in San Pedro and Malibu California, with one night in the valley. We had the rare luxury of prep time, so [DoP] Dustin Lane and I tried to dig really deep. By this point, I’ve seen just about every liquor market and late night restaurant in Los Angeles.

We started with some guidance and wisdom from location scout J. Max Simon. Because we were shooting all three videos back-to-back, we had to keep it contained and strategic. Permitting night shoots during the height of Covid meant we had to avoid residential zones. There was a lot of Google mapping, and then a week or two of late night footwork.

Above: Still of Sam Dew from the video for GONE

After the NTSW treatment Sam and the label asked me to write on GONE - where he would have more of a starring role.

There’s definitely magic to be found in both the off-line and virtual approach. We actually discovered the restaurant and the market by chance while en route to another spot. Their online listings had been buried.

One key reference in our search was an image of a house beneath a freeway overpass that I had saved in a folder years ago. Max was convinced it was Photoshop, but I stumbled on the exact spot while randomly dropping the Streetview man on the map. It became one of my favourite shots Dustin and I have captured together.

Above: Nyang Reat, on the DJ video shoot in Malibu, California

The cards are an alluring focus of attention, not only for story purposes but because they are lovely objects in themselves. How did you design, and create the cards? Were they central to the idea at the start?

They started out as something more like a passport photo but evolved into a deck of cards in later versions of the treatment. We were inspired by these collectible Swedish matchboxes from the 1950s that featured celebrities and musicians. I liked the idea that everyone has an eerie, airbrushed portrait somewhere, trading hands on a metaphysical black market.

Gabbie Bautista did a brilliant job designing, photoshopping, and distressing the cards after collecting headshots from friends and crew members. They were so well done we started coming up with more ways to include them in the story.

Above: Still from the video for DJ

Each has their own role to play in a nocturnal economy of desire.

I read that Sam is a big fan of your Flying Lotus video for Coronus The Terminator. Is there a thematic connection with that video?

I think the characters share a sense of being stuck somewhere in-between.

What importance do you place in the viewer understanding or following a narrative, or is it the mood/atmosphere/feeling more important overall?

I think understanding is secondary to feeling something, and being receptive to the mystery.

I always hope that people can follow the nuts and bolts of the action on screen; what specific meaning they take away from it is something I’m less worried about.

Above: Sam Dew, on-set of the DJ video shoot in Malibu

• Young Replicant is represented by Pulse Films for music videos and commercials. Watch his work here.

Behind the Django Django's Spirals and Shame's Nigel Hitter videos with Maxim Kelly and Charlie Reddie: "They're products of the pandemic"

Director Joe Wheatley and TV Priest frontman Charlie Drinkwater explain the video for Press Gang, a tragi-comic depiction of a grimy past that resonates in the filthy present. It's got legs!

It's not ideal trying to launch your directing career during a pandemic, but that is what Maxim Kelly has managed with notable success in the past few months. And teaming up with editor Charlie …

Shan Phearon's appreciation of the power of popular cinema has influenced his music video work for the likes of One Acen. and Ocean Wisdom. Now he has fused one of the most popular film genres with …

James (aka Ja) Humby is onto something with his live performance series Molten Jets. In outings for the likes of Horsey, Ross From Friends and King Krule he established the distinct …

The Reids direct a cyclical promo for Rasharn Powell's Blunder.

A growing cast of characters repeat the same routines within a single room, oblivious of each …

Sleepy Soul go on a musical road trip in Dustie Carter's promo for new release Self.

KC Locke directs another cracker for AJ Tracey, capturing his superstar lifestyle in a …